You are here: Home / Pope Francis

Why He Leads the Way He Leads 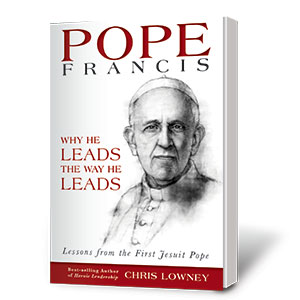 Pope Francis’s first actions were approvingly called “unprecedented and shocking” by a veteran Vatican reporter, and a subsequent Papal initiative was deemed “an epochal shift…a revolution.” His words and deeds have won Pope Francis an approval rating that any other world leader would envy.

Where did he learn to lead like this? Where does his vision come from? And what might the rest of us learn from him? That’s what Chris Lowney’s latest book is about.

It’s a book of firsts: the first to explore the Pope’s leadership approach and its Jesuit roots; the first to include recollections from Jesuits who worked beside him when he was Fr. Jorge Mario Bergoglio, and the first to draw lessons for the rest of us.

Pope Francis has said, “I think like a Jesuit,” and Lowney, himself a one-time Jesuit seminarian, shows just what that means and how the Pope’s Jesuit formation has influenced his vision, decision-making, and priorities. Lowney paints a vivid picture of Fr. Bergoglio the leader: the man who willingly embraced his share of community chores (pitching laundry into industrial washers at 5:30 in the morning), and the man who willingly made tough choices while heading Argentina’s Jesuits (leading one Jesuit colleague to call him “a pilot in a storm” whose “hands didn’t shake” when facing challenges).

But this book is as much about the rest of us as about the Pope: Lowney distills six powerful personal commitments from the Pope’s example and invites readers to make the Pope’s leadership approach their own, for the betterment of their families and communities.

Congratulations to our teams! Proud of our commitment to this goal...

Congratulations to our team for their commitment to this important objective....great to see it recognized.

Go @Creighton Jays! Always a pleasure to interact with your smart students and to field interesting, challenging questions!